While the coronavirus has caused havoc throughout the globe. Another such disease that has haunted humanity for years is cancer. Throughout the years, many cancer researchers have been working on searching for new modalities to treat and cure patients with cancer and devastating diseases. The joint efforts of academic and industrial laboratories have resulted in novel drug discovery and incremental improvements in the treatment of patients. Most of these improvements have risen from the combination of therapies that have resulted to prolong patient’s survival and a better quality of life.

Due to the complexity of the cancer cell environment, cancer size, location of tumors, and types and degrees of cancer cell mutations, the outcome for most late-stage patients remains poor and renders the treatment marginally effective only in a small percentage of the patient population. Recently, Cancer immunotherapy, or immune-oncology, has emerged as an effective cancer treatment that uses immune-modulators to activate a patient’s immune system to recognize and kill their tumors. CaroGen Corporation is on a path to build the super vaccine for the most dreadful disease. “We believe our CARG-2020 clinical candidate overcomes some, if not most, of the deficiencies of other modalities by acting through multiple mechanisms of action essentially acting like a cocktail of immunotherapies,” said Bijan Almassian, the Co-founder and CEO of CaroGen Corporation. 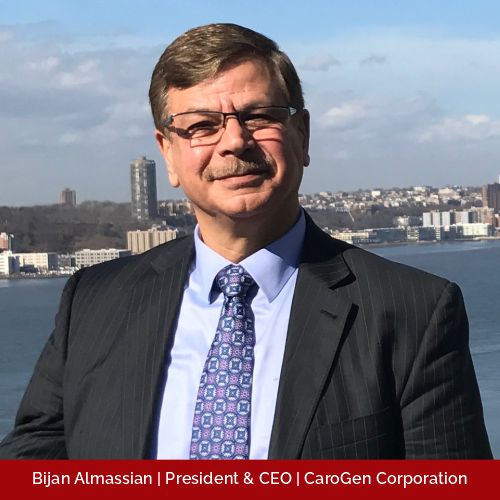 Revolutionary Breakthrough in the Industry

CaroGen was established in 2012, by Dr. Valerian Nakaar, formerly of Yale University and an experienced vaccine developer; Dr. John Rose and Dr. Michael Robek, both of whom professors from Yale University at that time; and Bijan. The foundation of CaroGen was based on a novel and transformative artificial virus platform dubbed AVIDIO. Dr. Rose developed this technology and later licensed it to CaroGen for worldwide use. But to attain the revolutionary breakthrough in the industry, several roadblocks await you in the journey. Similarly, CaroGen had to face a fair share of challenges before soaring to popularity.

Bijan had a former experience of working for several bio-tech start-ups and was familiar with the challenges. This experience taught him the virtues of patience and determination. Initially, CaroGen struggled to find capital as VCs often refused to invest in risky-and-high-reward early-stage companies. “As most early-stage companies will sooner or later confront the “valley of death”, we were forced to learn how to survive and think outside the box and to find ways to improve our platform, products including our own leadership skills to survive and succeed,” said Bijan. This determination proved beneficial as the company received substantial NIH funding that helped to develop CARG-201 for HBV and CARG-2020, immunotherapy with lots of great promise for cancer.

The initial focus of the company was to develop an immunotherapy for a functional cure of patients with chronic hepatitis B virus (HBV)—a disease with no cure and affecting estimated 300 million persons worldwide, most of whom will eventually die due to clinical complications such as liver cirrhosis and liver cancer. This HBV program has attracted more than $5 million in grant awards from the National Institute of Health and has fostered a close collaboration of scientists from CaroGen, Yale, and Albany Medical College. Their combined efforts have resulted in developing a promising clinical candidate- CARG-201. CARG-201 has the potential to cure patients of HBV and thus prevent clinical complications. Within a year or so, CARG-201 will be advanced towards human clinical trials.

Apart from this, the team of CaroGen is parallel working on feasible cancer treatment with minimal risks. Since 2017, the team has expanded its research efforts into immune-oncology and has developed a clinical candidate dubbed CARG-2020. The unique aspect of CARG-2020 is that it targets specific cancer cells while sparing normal cells and hence its name “an oncolytic virus”. The system is engineered to deliver three transgenes that can modulate the immune system. “The upshot of these manipulations is to further enhance the cancer-killing capacity of the virus and to improve the immune system and to render it able to prevent tumor recurrence, which is the ultimate goal to cure cancer,” explained Bijan.

In the preclinical animal models of cancer, CaroGen has demonstrated how CARG-2020 can cause a dramatic shrinkage of large tumors and has a major impact on survival. Moreover, the data also demonstrated that CARG-2020 can prevent tumor recurrence. The data demonstrate exceptional potential and reveal that CARG-2020 could function as “Pan-cancer Therapy”. The key distinguisher of CARG-2020 is its genetic properties that allow for the delivery of multiple armaments such as immune-modulators for the highest level of therapeutic efficacy in destroying the tumor and preventing its recurrence. Though the team still needs to see the translation from animals to humans, the progress has encouraged them and the novelty of the approach is validated by two reputable investigators at two different academic institutes. Bijan confirmed that within the next 12 months, the team is aiming to advance the potential ‘Super Immunotherapy’ to the clinic quickly in collaboration with corporate partners and investors.

Team dedicated to the Mission

Bijan has been successful in assimilating a team that is dedicated to the mission wholeheartedly. He believes that the salient features of leadership qualities are working hard and wise, keep learning, surrounding oneself as a leader with smart, loyal, and competent people, taking a risk by taking on problems thought to be unsolvable. His leadership approach and dedication towards the mission have resulted in the progress of CARG-201 and CARG-2020. Since its establishment, the company has undergone several challenges but today it is near to launch a potential vaccine that will revolutionize cancer treatment.

CaroGen’s team is excited about the potential of the AVIDIO platform to generate multiple vaccines and immunotherapies for infectious diseases and cancers. Moreover, Bijan believes that CARG-2020 and its derivatives could potentially revolutionize the field of cancer therapy and shift the paradigm in clinical practice.

Remarkable Journey from Dishwasher to CEO

Bijan’s journey is inspirational and influential for emerging entrepreneurs. He was born and raised in Iran and immigrated to the United States in 1978 after completing his Bachelor’s in Chemistry. Later he completed his MS and Ph.D. from Boston MA with full scholarships. As a young immigrant, Bijan had to learn English and also partake in menial jobs in order to supplement his meager stipend. From a part-time dishwasher, he soon was promoted to a technician and scientist in two different chemical companies in the Boston area. These lower-level positions benefitted Bijan with exposure to the operations of the industry and trained him on how to lead and motivate the team. As a leader, his proudest achievement has been to attract talented people to join the team and the mission to discover novel therapies for patients with devastating diseases through CaroGen.

Bijan has also been successful in finding a potential treatment for Alzheimer’s disease in collaboration with Professor Martin Sadowski (MD, Ph.D.) at New York University Medical School. The drug has been patented and the data was published in a prestigious journal, Annals of Neurology showing the proof-of-concept animal efficacy. The data confirmed that the drug helps animals with Alzheimer’s to reduce the amyloid-beta, a protein alleged to cause the disease, and to improve animal memory. Though it failed to attract investors to advance those chemicals to human clinical trials, the compounds have lots of promise in the potential treatment of Alzheimer’s which afflicts almost 6 million individuals in the USA.

Bijan was fortunate to have the right managers and bosses who gave him space and tools to take on more responsibilities, learn, and contribute. From learning English to undertake graduate studies while working in the industry as a part-time dishwasher to a co-founder and CEO Company developing transformative immunotherapies is truly remarkable. For the aspiring entrepreneurs Bijan has shared a message, he quotes, “My message to younger and new entrepreneurs is to have a vision and mission that is in line with your values and that is making the best product you can and making it available to the patients across the globe. Other suggestions that I have are to keep and surround yourself with experienced and professional people who are dedicated to the company and share your vision.”

It is critically important to start in a business that you have expertise in and surround yourself with people who complement your skills, are willing to take risks, and share your vision.