Cryptocurrencies have evolved rapidly in recent years. The term crypto is no longer a buzzword today as it once was. Over these years, we have come to understand the immense potential of crypto and how it can be leveraged to create huge fortunes.

Be it Instagram, telegram, reddit, or YouTube, Crypto has exploded everywhere across the globe. Many governments have made it their official currency already and some are in the process of making it. Yet, despite all this success and popularity, it is quite surprising to note that only 4.2% of the world population has adopted crypto until now. Many people don’t see a point in buying crypto or in other words, they don’t identify the real value behind crypto.

Due to the increasing inflations and steep fluctuations in prices, people mostly hold mixed feelings towards cryptocurrencies. They don’t want to risk it all. 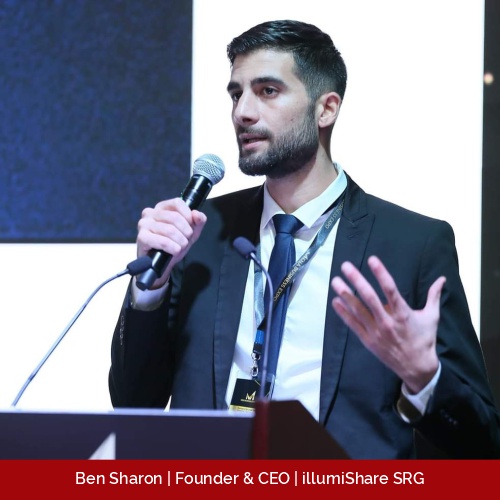 Their common fear is seeing their invested money trail off before their eyes. But, if there was a way where people could buy a token or coin that’s backed by some asset, maybe they will buy. Because this time, they can rest assured that it is backed by an asset and their money is safe. Maybe backing with some asset like gold would do the favour. OK wait, how about technology as an asset? Or… how about real cash?

Fine, let’s get a bit greedy this time and wish for more. How about all the three as assets?

Well, getting at least one of these three assets seems too big a task, let alone three.

SRG has done exactly the same.

Founded by Ben Sharon, SRG is an Abu Dhabi blockchain-based ecosystem that is supported by three distinct assets. The company’s innovative approach to economics combines traditional assets like cash and gold with cutting-edge technology and human capital. This combination allows SRG’s token to have limitless growth potential while providing confidence in times of financial crisis. Using multiple assets to back up the SRG means it is not tied to one fluctuating market or economy. “We believe money should give the people both stability and opportunities. By combining these three assets, we have created a new economic method, driven by innovation and relying on tradition at the same time,” says Ben Sharon, Co-Founder and CEO at illumiShare SRG.

One of the things that makes SRG stand apart in the industry is the nature of its tokens. SRG token sets a floor price that always will be correlated with the all-time high Market cap value (as long as the $SRG market-cap will grow, the reserves will grow simultaneously and determine a new floor price) and at the same time, SRG’s token price has no upper limit. SRG is NOT a “stable coin”. “ It is a token without limits of growth & opportunities, backed up by 3 uncorrelated assets,” says Ben.

Apparently, when it comes to backing gold as an asset SRG isn’t the first of its kind to incorporate that. A few companies, however, have attempted to do the same in the past. But almost all of them were hardly able to succeed in it because people weren’t informed where the gold was reserved or if at all gold really existed. Whereas in the case of IllumiShare, it’s a completely different ballgame. The company plans to initially keep gold in Abu Dhabi bank, and then as things progress, it aims to make gold deposits in other major banks in major cities across the globe to decentralize the gold reserve.

And that’s not even the best part. SRG plans to offer live view of its gold in storage for full transparency. Ultimately, this level of transparency is sure to skyrocket people’s trust on the company, provided the fact that no other company has ever projected such transparency of gold reserves ever before. The company is challenging the status quo by defining a new transparency standard, the Proof Of Gold (POG).

Notably, SRG has also created a unique asset-backed NFT Marketplace. Unlike other NFT marketplaces, SRG’s NFT marketplace will have an anti-fraud system to prevent scammers from uploading scam NFTs. This is a simple no-code module, where anyone can generate their own NFT collection, buy and sell NFTs without using a single line of code. Furthermore, in the NFT Marketplace, SRG will only work with Certified Companies and focus on four unique categories:

SRG is already in negotiation with the biggest real estate companies in the world, and at this point, specifically from the UAE, Europe and Africa. Each of these certified companies will have the ability to tokenize their assets and sell them on SRG’s marketplace. For instance, SRG will give them the opportunity to take one physical apartment, and to split it to 20, 100, 200 different NFTs and from which they can sell a part of an apartment/Office to people who want to invest only $5,000 , $10,000 , $20,000 or $50,000 in the real estate markets via NFTs.

Certification and Tokenization of Gold & Diamonds.

SRG has split this into two different channels. The first channel is to be an alternative to the regular industry standard certificate to sell Gold and Diamonds like GIA and Brinks. Through this change, SRG now gives people the opportunity to provide NFT certificate and to sell physical gold and physical diamonds via its marketplace.

The second channel is only for the certified mines. Today, mine owners take up to two years until they extract the resources from the ground and pay their employees and other operational expenses. This costs them a lot of money. SRG tackles this pain point by giving mine owners the opportunity to tokenize their future assets via its NFT marketplace, and thus enabling them to fundraise with ease, on the condition that they share some percentage of their revenues with NFT holders with full transparency.

Certified farmers and lab growers will get the opportunity to tokenize their plants via the company’s marketplace and therefore fund raise from that—provided they must share some % of Revenues with the owners of the NFTs. At the same time, the NFT holders can participate in the yields of the plants as the plant grows bigger.

It is very important to note that the company is a platform and marketplace similar to Airbnb and like Uber. As Airbnb does not own any assets by itself and Uber doesn’t own any taxi, so is SRG.

Its assets backed NFT Marketplace will be in the middle with the compliance and the management to connect between a’ party with b’ party etc.

Besides, all the trades in the company’s NFT marketplace will be only and exclusively with its SRG Tokens, which will give another positive traffic and tool to use and drive the price up.

Confluence of Brilliant minds and Passion

Yet another factor that gives SRG a competitive edge is the skills and experience of people in its teams. The company’s talent pool consists of number of top leaders from BlackRock, Polygon, Binance, Ethereum, Meta, Goldman Sachs, JP Morgan, the Dubai Gold Exchange and Microsoft. Together, they have carefully built a project that is all set to revolutionize and take the world by storm.

Ahmed Elmetwally, CEO/General Manager Private Office of Sheikh Mohamed bin Ahmed bin Hamdan Al Nahyan stated with pride that, “Together we will make the world a better place, where money will give the people both stability & opportunities.”

The new alliance will see SRG working to open the crypto market to the masses based on a digital gold standard. According to company’s CEO and co-founder Ben Sharon, “This is an amazing opportunity for us to work with one of the most influential families in the world and help them enter into the digital currency space.” For SRG, this partnership represents an important milestone in their goal of becoming a leading player in the global cryptocurrency market.

Notably, as with any successful product or service, people and media have already caught the wind of SRG and the word is spreading like wildfire. Recently, IllumiShare won the award for “the most innovative blockchain ecosystem of the year” by the Entrepreneur magazine. That too, months and weeks before its launch. With that being said, SRG has announced its Token Pre-sale launch on Nov 23rd. And just one day before the sale is the company’s Gold List event on 22nd Nov 2022 in Dubai, in which government officials, including The Royal Family of Abu Dhabi and diplomats will attend.

With its unmatched teams and revolutionary ecosystem, SRG’s future looks more than promising. Down the road, the company aspires to bring in more innovation to its projects and broaden its reach to several countries. “We believe that, in a few years from today, SRG will be supported by at least 50 countries around the globe and will be an alternative source of money,” concludes Ben.

Description: SRG is an Abu Dhabi blockchain-based ecosystem that is supported by three distinct assets. The company’s innovative approach to economics combines traditional assets like cash and gold with cutting-edge technology and human capital. This combination allows SRG’s token to have limitless growth potential while providing confidence in times of financial crisis. Having announced a historic business alliance with the Private Office of His Highness Sheikh Mohamed Bin Ahmed Bin Hamdan Al Nahyan from the Royal Family of Abu Dhabi recently, SRG  is challenging the status quo by defining a new transparency standard, the Proof Of Gold (POG).

Designation of the Leader: Founder and CEO