Zipari : The right solutions make CX easy – and an expert partner makes it simple for you to get started quickly

The right solutions make CX easy – and an expert partner makes it simple for you to get started quickly. Zipari has used their industry expertise and technology know-how to create the first and only omnichannel enterprise platform built specifically for the health insurance industry, Zipari’s CX Platform. Break out of the one-size-fits-all box, break away from traditional consumer engagement strategies, and break through barriers to start converting goals to actions. Company’s objectives 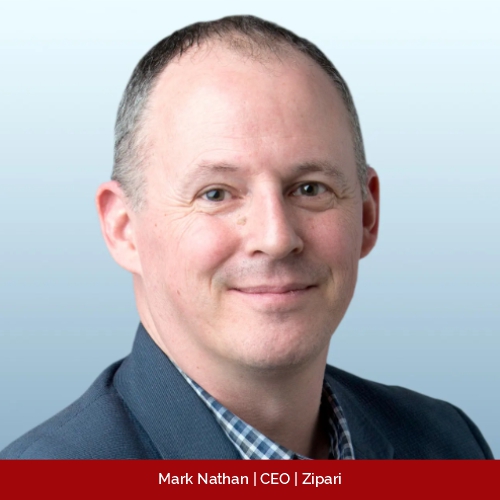 Our few words with the CEO of Zipari, Mark Nathan, we got insight about the company and the beliefs and aims of Mark Nathan from Zipari. Read further to find out.

What was the motivation and the inspiration for you to get this company going?

Ans. Well, I have always had an entrepreneurial streak from very young and some of the places I worked at, in the beginning of my career, I have always had this entrepreneurial feel to what we were always doing. I always gravitated towards that. I had done a startup at the very beginning, in the early 2000s but that did not really take off, but I learned quite much from that, then I spent about 10 years on the payer side. I took challenges and worked for a small company in Berklin and I had to develop a technology for that. We were getting a lot of work done, but the company I worked for did not want to be in that business anymore. And so, we thought about all the technology that was set up and we wanted to make it work.

And it was at that time it took about 9 months, which were very challenging but i met with a bunch of investors. Eventually, I met with Dave Schwab from vertical venture partners and we partnered up and founded Zipari in the summer of 2014.

I did not really build out a plan to build a startup but we got and took the opportunity and we were able to shape into the founding of Zipari.

What technologies did you have available?
What were the hardest things in businesses to take a home ground for business purpose, technology and create a generally available software out of it? What did you build there and how did you manage to convert it into a software that anyone could run?

I have been a technologist for my whole life, as I first worked at NASA for a number of years, and robotic studies. I have always been on the software and AI side and actually at the company which did not take it off, I actually learned a lot. I created this semantic mapping and technology that computes in real, 11 thousand pieces of information for every senses block which is 2 hundred and 20 thousand senses. So there is a lot of data for a lot of different demographics and we had to find a way to graphically produce and take that data to convert into meaningful information. I started building some technology and then I used it at Guardian health insurance when I was there for ten years. I came up with a unique technique to manage data and services and UI. On the technology side we just had the TPA and so, we ended up building a service layer that will allow us to connect to the TPA for three different health insurance companies at the single code base for their member portal and service center, online shopping, etc.

Right from the beginning, we built something that was very scalable and built for multiple payers at once, but that was pre-Zapari, and when we brought that to Zapari we started to think about product marketing and then our very purpose had to scale.

When was your first management role?

It was in my first job out of college. I was 24 and managing about a dozen people. That’s when I first started developing my style. In the morning, I would go around to people and ask if they needed anything to help them do their jobs. And I’d do that again in the afternoon.

Tell me about your leadership style now.

I don’t really believe in firing people. Although it’s necessary at times, nine times out of 10 it’s usually a hiring problem. Nobody likes to fire people, so I try hard not to have to get to that point.

I see it all the time, where somebody is brought into a role because we need to fill it quickly, and we kind of take a pass on checking whether they’ll fit into our culture. But when you fire someone, not only does it hurt the person, but it hurts their family, it hurts the co-workers who liked that person, and it creates fear. So there’s all sorts of damaging ripple effects.

I like to say that nobody ever comes up with a brilliant idea while they’re being chased by a lion. You need to create an environment where people can be themselves. So now when we hire, we’re really cautious. We have a hiring manager, and there are also four of us who screen for cultural fit.

I look at people’s aspirations, such as where they want to get to, and then I figure out how to get them as close to that as possible. Once I do that, then their productivity goes up dramatically because all of a sudden they’re doing something they like.

I’m also very direct about what I expect from people. People know that I’m going to say it how it is, and I’ll tell people how I think they should be doing better.

I found that I learned the most from managers who told me the really tough things that I didn’t want to hear. So I tell people I’m mentoring that there’s one rule when we meet: Put on your Teflon. If you really want to grow and you want to learn, put on your Teflon because I’m going to tell you things that nobody else is telling you.

Q.What career and life advice do you give to new college grads?

I’m a big believer in grabbing new opportunities, especially if it’s a new challenge that will add to your repertoire. You’re going to switch jobs many, many times in your life.