If your house has a wooden deck, keeping it in good shape is costly and time consuming. If you don’t keep up with the regular maintenance, it becomes even more costly and time consuming to fix — or, eventually, it all just starts to rot and fall apart. We’ve got robots that can clean our floors and mow our lawns. There’s got to be a robot for deck maintenance, right?

That’s what Gal Frenkel thought, too. After spending weeks hunting for something that could help keep his deck in check, he decided to build it himself. Thus, RoboDeck!

The quickest way to capture what RoboDeck is building might be to just say “Roomba, but for resealing your deck” — but Frenkel tells me that barely scratches the surface of what they’ve had to figure out. 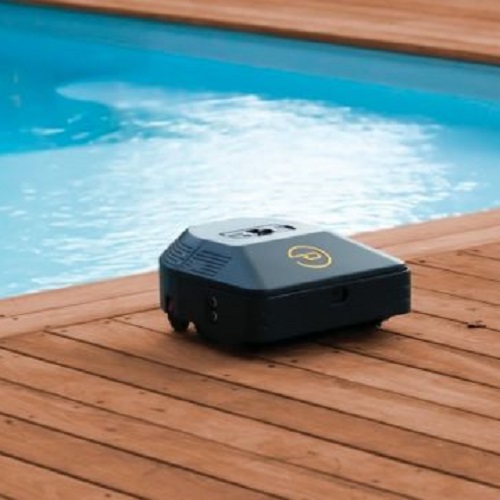 Because they’re laying down a sealant, they’ve had to come up with solutions to be ultra precise and consistent about how they’re spraying and applying — and because every deck is different, they’ve had to come up with their own mapping/routing tech to make sure they can cover an entire deck without rolling right through a section that just got sealed. Like a robot vacuum, it needs to know where the edges and drops are and avoid them accordingly … but it also needs to be smart enough that it doesn’t think every little gap between boards is actually the beginning of a step. They’ve also formulated their own sealant to allow for more coverage with less product and built custom spray nozzles that fit their needs while keeping costs low.

Frenkel tells me that RoboDeck is meant to be sold as a subscription. Instead of buying the bot outright, you pay them a regular fee for the bot and a steady supply of stain cartridges. The cost varies based on how much stain you need, which is determined by the size of your deck, weather patterns in your area (you won’t run the bot when your deck is covered in snow, for example) and more.

He also tells me that this prototype can currently maintain a deck of up to 500 square feet on one cartridge/charge. For decks larger than that, they’re working on a docking station that will recharge the bot and automatically refill a staining cartridge up to three times.

One thing to note: RoboDeck can’t take a beat-up/weathered deck and make it new again. It’s meant to be used to keep a new deck looking good or to maintain an existing deck after a pro does their thing. As such, the spray used here is transparent; it won’t darken or otherwise change the color of your deck, instead maintaining the clear protective coat on the wood over time. RoboDeck estimates that running its robot will cost 50% less than calling in a pro for annual maintenance.

Frenkel tells me that their product is currently in the late prototype stages, and that the company has raised $500,000 primarily from SOSV’s HAX.